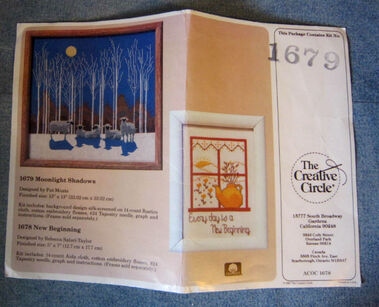 ​I recently finished a vintage cross stitch project from The Creative Circle.  Published in 1987, it's called Moonlight Shadows.   With a silk-screened background - it's certainly different from most of my projects.

It features 4 sheep standing in front of woods on a moonlit night.  The trees are worked in white and took forever to stitch.  I actually used a long-armed cross stitch for them, to get a little more texture.

With a minimalist palette of white, black, gray, browns, and a touch of blue for shadows - the overall mood is very rustic, very serene.   It's a joy to see every day. 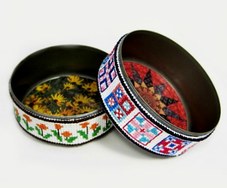 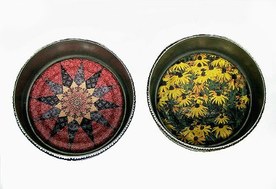 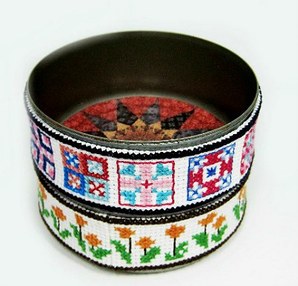 ​Small tins are great in the sewing room or wherever you craft.   I use them to hold threads ends from sewing and cross stitching, as well as waste wire from jewelry-making.   Tuna cans are the perfect size.  ​I washed them up good, measured the distance around and got started on the cross stitch bands.

​That is where I learned that 14-count Aida cloth does not always have exactly 14 meshes to the inch!  (The band with the meander got some major surgery as the lines did not meet.  I added the date of completion and gave it to my husband.)

​You would not believe how long it took to cross stitch these tiny bands.  That it, unless you cross stitch--then you would believe.  But after all the work, the bands actually turned out to be a perfect fit--they slip right on the cans with no need for glue.

The thread catchers needed something extra after the bands were on, so I rummaged around and found some images that matched the theme of the bands perfectly - a beautiful star quilt for the quilt band and a field of coneflowers for the floral band.

A few layers of Mod Podge, and I was done.  I use one at the craft table where I sew and make jewelry.  The other tin lives by the rocking chair where I crochet.

This small project took a long time to complete, probably because the floral garland required a lot of attention.  I think I prefer a more stylized folk art design.  They usually have a lot more negative space and lots of repetition.  But the effect of the lush flowers IS nice.  The blue was worked with Colonial Knots, which I rather prefer to French Knots.  I used 3 strands on them, and two strands on the rest of the project.

The finishing was fast.  I used Pellon to attach the Aida cloth to a double layer of cardstock, and applied an "inexpensive" particle board frame with super glue to the cardstock base.  I got the frame by deconstructing a Dollar Store item.

Design size is a little over 4 inches square and the Rustico Aida was very nice to stitch on.

It literally took 9 years from final stitch to wall display.  I worked this project on a sheet of 14 count plastic canvas.  It did buckle a bit, so I laced it to a sheet of sturdy cardboard.   And there it sat for a long, long time.  Next time I use plastic canvas, I will think ahead and get a frame it can fit in.

The stitching itself was inspired by the Sunshine and Shadow design in this great needlepoint book.  That is the Amish term for a design more commonly known as Around the World.  I bordered it with tiny patchwork designs, which was great fun to plan and stitch.

I finally got it on the wall by using the back of a picture frame that had been repurposed.  I glued a sheet of gradient cardstock to the frame back.  The needlework got attached to this base with one inch wide 3M adhesive squares applied in each corner.   After such a long wait, it was a very fast and easy chore to get it on the wall.